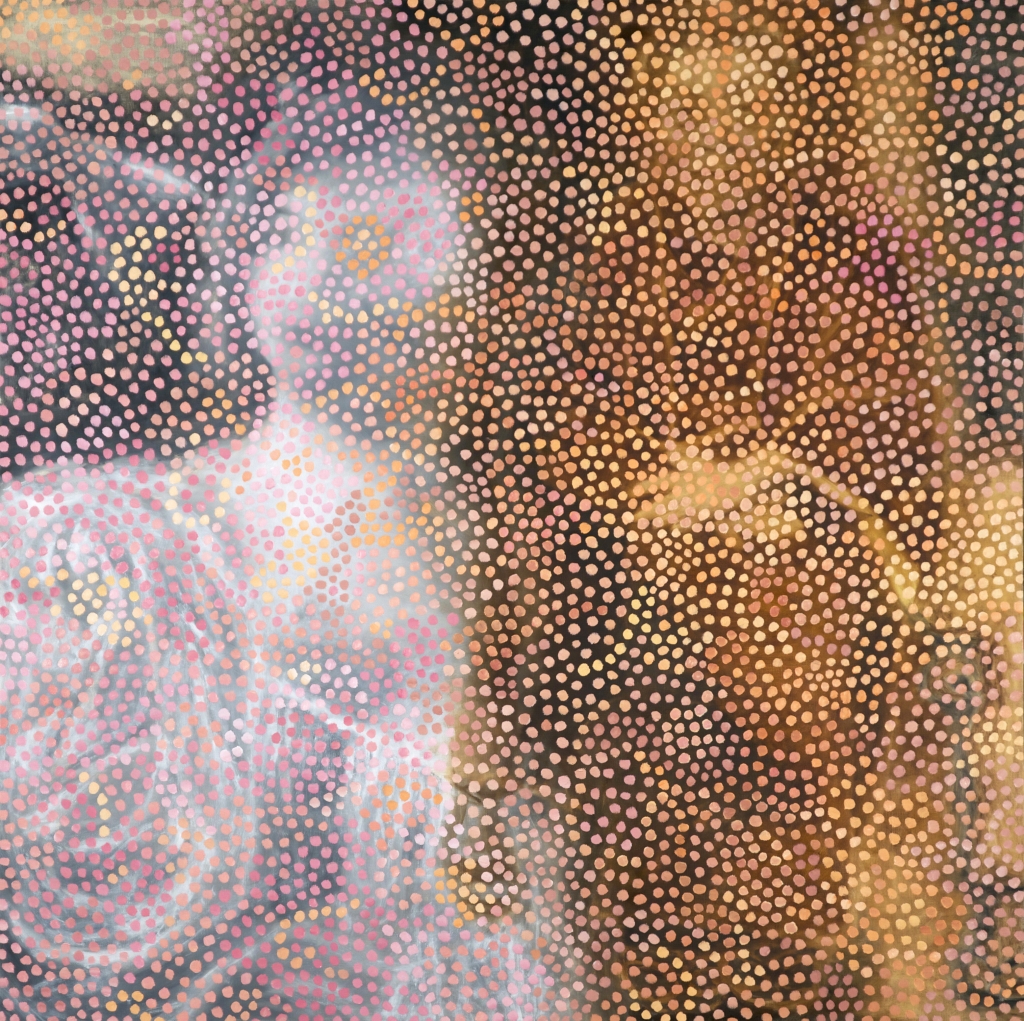 「ALL HUMAN FIGURES THAT APPEAR IN PAINTINGS ARE GHOSTS」

All human figures that appear in paintings are ghosts. They are images of the dead.

In Mugen Noh (fantasy Noh), the dead appear on stage as they cross the hashigakari *1. Needless to say, the hashigakari lies on the border between reality and the spirit world, but the structure of paintings also takes on a similar significance.

A wooden frame and canvas… The white ground of the prepared surface occupies the borderline between ensuing reality, but no one can know what lies beyond it on the other side of the canvas. It has a similar existence, so to speak, as the agemaku*2 at the beginning of the hashigakari, waiting in anticipation of the spirits of the dead.

At the same time, the person painting the picture inhabits a layer of film stretched between the canvas and this world. It is when this layer is jolted, that is to say when the surface of the canvas undulates at the touch of the paintbrush, that ghosts emerge. It is only the faintest pulsation, and nothing comparable to the chanting voices in Noh, but it is undoubtedly this first “utterance” that invokes the spirits. When this happens, for a short instant there is a sense that the real world and that of the spirits appear connected, yet this is nothing more than an illusion.

In the world of painting there is no stage, only a bridge. Seemingly visible at first glance, this “stage” or “illusion” always attaches itself to painting but does not in fact exist. It is a figment of the imagination.

What is important here is that of “invitation”. The hashigakari is nothing more than a place where spirits are summoned. As with early photography, and now more difficult to achieve with modern photography, it is as if something rises to the surface together with the passing of time. That is the mechanism at play here, and it occurs as time with the compression of time.

In early photography, it wasn’t possible to reproduce the visible subject instantaneously as it is today, and by the same token paintings also cannot be completed in an instant. That which becomes the photographic subject, or that which becomes the object of the painting must remain still. This duration of time is indispensable in order for ghosts to appear, and their appearance is nothing more than the result of time condensed, or rather the result of their shifting through time. Their forms not only shift at the instance of death, but are in a perpetual state of motion. In making them visible in a spatial plain, they occupy the place of the hashigakari. It takes time to summon the spirits.

And so, after all it is not a stage that I want to see. I am not seeking the emergence of dramatic events as in Greek tragedy, brought about through the chorus. What I am hoping for is the modest desire of a medium, not that of an audience waiting in anticipation for the drama.

As a mark of my intention, I imprint my presence on the surface, dot after dot. As I imprint my existence inside this layer of film, I direct the painting towards its end.

(1)    A bridge-like passageway connecting the back of the theater with the main stage.

(2)    The entrance curtain between the back of the theater and the hashigakari.